Big Day Scout, the weekend before Founder’s day, was a good event for Alpha Theta Rover Crew. Five of our crew members caught the train into the city and met at Federation Square for the start of the event. 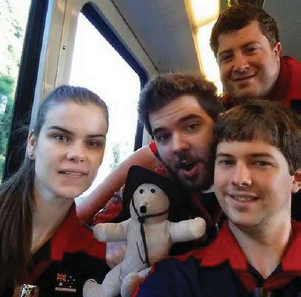 The MC was one of our ex-rovers, who gave us the run down on what the event was all about, before we were let loose on the city of Melbourne in a massive CBD wide scavenger hunt.The scavenger hunt took teams from the one side of the city to the other through the laneways and some of Melbourne’s landmarks. The art work in the city was amazing, and although we were rushing around, we still managed to enjoy the walk and the view.

When we finished looking for street art, we had lunch before heading across to the Sidney Myer Music Bowl for the ceremony to swear in Shane Jacobson as the Chief scout. Outside the Music Bowl was a carnival of activities including abseiling tower, obstacle courses and a winter wonderland in the middle of the Australian summer. The scout band played  music and there was even a flash mob done by Venturers. You could do all these activities while waiting to get through the gates and into the ceremony. 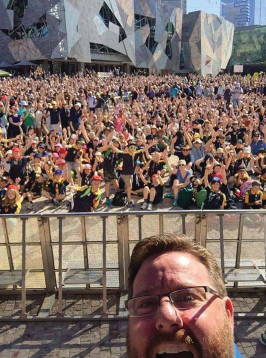 Of course the fun didn’t end once inside the gates, where they had guys in a diving tank and other events all centering on the ceremony.

After Shane Jacobson was invested the event was drawing to a close. With our new badges, t-shirts and caps we wandered back to the station to head home. But this wasn’t the end of Big Day Scout for Alpha Theta.

A few days after the event finished, we got a call saying that we had won the game for the rover section and we were happy with just the knowledge but Branch had an award for all of the winning teams, so each team member won a backpack and a wireless speaker for the crew.

All in all, even without the prizes, the crew had a great time at #bigdayscout.